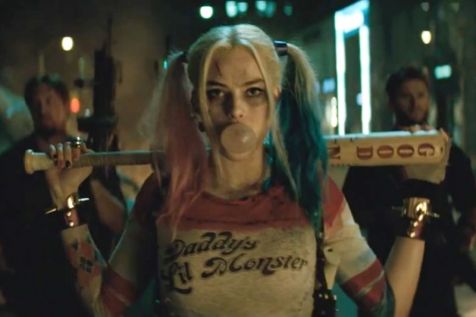 This was probably the greatest music video I’ve ever seen (besides Thriller of course, duh)

One of my favourite quotes from Suicide Squad comes toward the beginning of the movie when the age old question is asked: “What if Superman had decided to fly down, rip off the roof of the White House, and grab the president right out of the Oval Office. Who would’ve stopped him?” Well… The first hero I would think of to get us out of that hypothetical jam would definitely be Captain Boomerang!

Suicide Squad tells the story of Amanda Waller, played by the always brilliant Viola Davis, as she attempts to assemble a team of the biggest and baddest to protect the United States against hypothetical Superman-esque forces. They are the bad guys, everyone. Get that through your heads, they will for sure remind you whenever they can that they are the bad guys. I will start off by saying Margot Robbie‘s portrayal of Harley Quinn has easily been one of my favourite performances in any comic book/superhero movie in recent memory. She is phenomenal, guys and I honestly would not have minded if the whole movie revolved around whatever the hell Harley felt like doing that day. I thought I would grow tired of that accent and ditziness and granted there was a moment, particularly toward the end when the worst line ever was uttered, Robbie somehow managed to keep the character fresh as the movie progressed. Gold Star!

Jared Leto as the Joker… I don’t wish to cast too harsh a judgement on him since he didn’t play that big of a role in the movie, even though he did appear in quite a number of scenes, but for what I witnessed I wasn’t a fan. Not even counting the Romero, Ledger or Nicholson portrayals, the grills he was rocking added nothing to the character save it made it more difficult to understand him but he just didn’t have that kind of domineering presence to him. I was more scared of his bodyguards than him, and when it comes to arguably the greatest comic book villain of all-time, I need to feel sheer terror when he’s on screen. Cara Delevingne is a wonderfully attractive human being but for the love of all that is Matt Damon her acting abilities are virtually non-existent. I cannot wish enough that they got someone with the acting capability of a Margot Robbie to portray Enchantress. Will Smith gives a great performance of a quippy murderous Will Smith. Every other member of the Squad gave passable performances, Jai Courtney absolutely owned his Captain Boomerang character. The standout for me besides Robbie as Harley Quinn was Karen Fukuhara as Katana… She nailed it, dude. I think I felt more for Katana’s character than I did anybody else, and she had maybe 10 lines in the whole movie!

There are some great and not-so-great uses of special effects in Suicide Squad. MILD SPOILERS I loved a particular scene involving Diablo going Full Super Saiyan and some of the scenes with the beginning stages of the Enchantress. END SPOILERS. The effects that had to do with Enchantress toward the end though… oh man, it looked like a bit of a shitstorm. Especially with those overdone-in-film damn blue beams! The soundtrack is also quite enjoyable actually, I foresee myself viewing some of the scenes on YouTube occasionally when I get a hankering for Eminem. The score was way too much though. It was overpowering at times and all I could hear was just LOUUUUUUUUUUUD NOISES!!!

You’ve probably heard about the editing issues in Suicide Squad… and ho-ly-dickens, my friends the editing is here, there, over there, under where, EVERYWHERE. Off the top of my head I can think of four instances that immediately took me out of the movie because I thought “what the fuck did they not catch this post? During writing it??”As I mentioned, Cara Dev… is easily the weakest of the bunch and that is truly disappointing because of how important her role is. I actually enjoyed the exposition they gave for the characters since I knew nothing about them and felt like I had an understanding of each member by the end of the film, however you can see just how sloppy the writing really is and I do attribute that to the 6-week period director David Ayer allegedly had to pen the script.

To conclude, good god, DC, please crank up the brightness levels for your next features. Couldn’t see shit!

If you’re looking for a relatively fun comic-book movie and don’t mind the occasional “wait… what the hell was that?” check out Suicide Squad.